I have been a Doors fan all my life. I had every cassette, and read Sugarman's delightfully sensation book 'No one here gets out alive' before I had a driver's license. I had forgotten about the band, for the most part, over the years. Unlike the Dead, their music didn't grow on me with time. Then, last month, I picked up drummer John Densmore's book 'Riders on the Storm'. It was a decent read, and solidified what most of us think about regarding singer Jim Morrison: great and talented singer, also a colossal asshole of a human being.

Whatever. His fate wasn't to be a great human being. His fate was to be a great rock star... and that he was. Like many asshole rock stars after him (think Axl Rose, for example), he was meant for brighter lights and darker times. So, my question is this. What the hell happened to him? Densmore's book implies alcohol got to him. Probably, but he was just a kid. 27, man! I haven't read keyboardist Manzareck's book, because he has always seemed like an opportunistic douche bag to me. Still does.

So, Jim went from being this beatific arty film student doing blues numbers with some friends in the valley. This is that Jim… 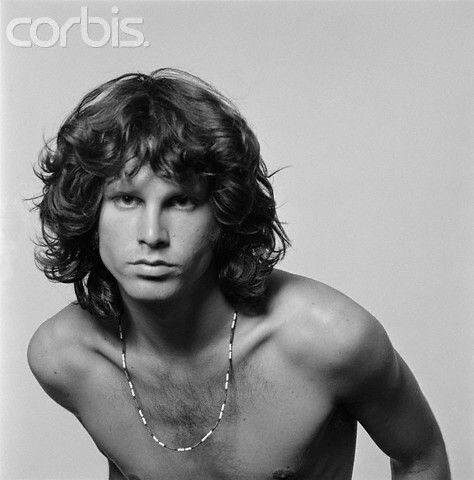 Ok, it is 1967 here. That makes Jim about 23. He even looks like a film student. Jesus, man, have a sammich.   He is a child.  It appears a very, very stoned child... but a child nonetheless. Something happens to Jim very quickly. In the course of just writing and researching this post, I made a profound observation. What happened to Jim happened to America. What happened to Jim can be perfectly explained by Hunter Thompson's passage from 'Fear and Loathing in Las Vegas':

"You could strike sparks anywhere. There was a fantastic universal sense that whatever we were doing was right, that we were winning...And that, I think, was the handle – that sense of inevitable victory over the forces of Old and Evil. Not in any mean or military sense; we didn't need that. Our energy would simply PREVAIL. There was no point in fighting – on our side or theirs. We had all the momentum; we were riding the crest of a high and beautiful wave...So now, less than five years later, you can go up on a steep hill in Las Vegas and look West, and with the right kind of eyes you can almost see the high-water mark – that place where the wave finally broke and rolled back."

Yeah, Thompson nailed it... and Jim lived it.  The difference in the picture above and below is approximately 2 years.

Wanna see Jim 2 years after that? 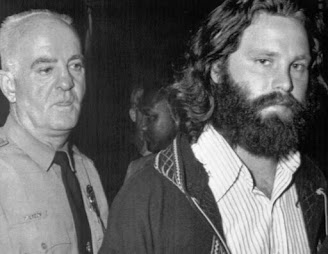 It is no surprise there is no photo of Jim 2 years after this. Jim was dead within a year of this photo (him bring dragged into trial in Miami in 1970). Dude was aging faster than Jerry Garcia.  Garcia died at 53… and looked to be in his 70’s.   Looking at that photo, one could say "you can see the light is gone from Jim's eyes.  He is a dead man walking!"   While that is true, it is also disingenuous.  This photo is Jim getting dragged into court in Miami over allegedly showing his dick to the crowd.  If he is found guilty, it is pretty much the end of the Doors at the very least.  Spoiler alert, he was found guilty.   So... he bolted the country.  Why not?

Where is Jim Morrison four years after that cherubic photo above?  To absolutely no one’s surprise – dead! The band is broken up and he has moved to Paris for some inexplicable reason. The 60's did that to Morrison, they did it to America, and they most certainly did the same damage to Thompson. Here is the telling piece of the whole story. They say a picture tells a thousand words. So, dig this. What has happened to this poor guy? He looks like a 55 year old miner. This is Jim approx 1970... just three years from that album shot and two years after that candid airplane shot at the top.

How could this be the same guy from the top? In two years that happened? Man, apparently being an incredibly sexy, talented, and charismatic rock star is just terrible for you. If that is what happened to Jim, what happened to America in this time? In short, the same damn thing.  You know how they talk about how presidents age super hard in the White House?  Man, that is nothing compared to being Jim Morrison for a living.  No wonder dude is dead.  He looks 10, 20, 30 years older in this photo, and I bet he felt it, too..

Anonymous said…
well, maybe the same thing that happened when you thought of jim being transformed. its perception man it changes even when the view and viewer are same. and he didn't die young, he just got born early. this could have the best time, and again after sometime. and 4 years of music means 40 years of 'mystery', of anything other than his music.
11:54 AM

gets into Jim's poetry etc, his words seem a good place to start if you wnat to understand this guy. Cheers
7:48 PM

Kenny said…
Jim showed signs of deep seated psychological, problems from an early age. Any one, who has read biographies, of him, will see that already, in high school he was a provocative, risk taking, individual. This inherent instability in his character may have been partly genetic, and partly upbringing. Anyway, fame would just magnify this inherent instability, in his character, and make it worse. But Jim would have been an inherently unstable personality even if he had not been famous. Fame just exacerbated the problem. Personally I think he suffered from, borderline, personality, disorder, or something similar.
6:30 AM

Kenny said…
This comment has been removed by the author.
6:34 AM

Anonymous said…
This comment has been removed by a blog administrator.
10:40 AM