why they keep re-mastering albums - it ain't what you think Why they really remaster albums

What if I told you that the reason every album is being remastered is NOT a cash grab?  I used to fall for it, and I was a ‘collect ‘em all’ guy.  Until I realized I have never heard the difference in a remastered album.  So, why do it?  To sell the catalogue, to make fresh money off an old catalogue.

Well, the money doesn’t hurt.  There are bigger reasons, though.  Two of them, to be specific:  to protect the original acetate tapes, and to ‘re-copyright®’ the material.

First - to protect the acetate.  albums/records/cassettes were recorded onto tape until the early 90s.  That tape (think of the spool of plastic that held the music on a cassette tape’ is fragile, and it is quickly degrading. It is oxidizing.  I am not going to explain the technology, or even pretend I get it.  It is breaking down, though.  In 100 years, those original reels won’t be playable.  To move them to digital protects them for another generation. It also gives us much more control over the material.  There is a BIG catch to this.  You can only do it once.  If you blow the transfer from tape to digital, you are screwed.

Continuing to try to play these tapes will ultimately cause permanent damage to the tape and clog the tape path of the playback machine.Fortunately, most tapes suffering from binder breakdown can be restored long enough to be transferred to current media.This is where the baking comes in.
Several years ago it was discovered that baking tape at low temperature reactivated the binder making tapes playable as new.

In order to get these original acetate tapes to be even playable, they have to be baked.  That isn’t a fancy science or music engineering, term.  The tapes have to be VERY gently heated to about 135 degrees.  Once you do that, they are ready to be broadcast and captured to digital.  However, doing this destroys the original tape.  You truly only get one shot.  Imagine if someone gives you the original tracks to the Beatles recording.  Bake it and transfer it.  It will literally destroy the tape, so no do overs.

Basically, those acetates are already dying and fraying.  So, capturing them is a now or never scenario.  They are having a similar problem with old television broadcasts and preservation… but that isn’t what we are here to talk about.

This is a story of copyright –

the first big one is most 'work for hire' copyrights expire after about 60 years.  Let's what 'work for hire' means in this context.   Legally, the record company hired you to make an album for them.  You did that, and they paid you.  They now own that thing.  Here is an analogy.  You hire a craftsman to build you a beautiful coffee table.  He delivers it.  it is great and you are pleased and you pay him.  end of discussion, it is YOUR coffee table.  You can burn it if you want, or sell it for a million dollars.  You hire neighborhood kids to paint your barn.  When its done, and you paid them, they have no intellectual rights to that barn.  They can't tell you not to use that barn in a Nike ad.
What This is good news for music fans.  Over the next decade, a GLUT of unreleased gems and live shows and demos are going to emerge on a large scale.  Just to protect them, and re-copyright them.

Of the various copyright laws, a BIG one is 1972.  That is when they changed the rules… long after the fact.  Right now, radio stations do not have to pay usage or licensing fees on anything made before 1972.   WTF?  We need to open an oldies station, y’all.

This means everything recorded by the Beatles, the Doors, Hendrix, Cream, early Zepp… they don’t get paid for ‘spins’.  UNLESS – you remaster and re-release the album after then.  Each time a recording is remastered and re-released… it resets the patent and copyright clock.  This is why Jimmy Page puts out more Zepp re-issues than Steven Spielberg and Star Wars box sets.  Odds are, Spielberg did same for same reason, but I am not educated in the rules of film.  Ironically, this loophole worked against Zeppelin last year.  Remember how they got sued for totally ripped off the riff to Stairway?  Isn’t there a statute of limitations?  We are we fighting about a song released in 1971?  We aren’t.  We are talking about a song that was ‘technically’ released 3 years ago.

You need to know this, because right now there is a bill in Congress to pay artists for streaming (across youtube, spotify, pandora… etc).  This bill wants to mimic the radio laws, and has a provision that nothing recorded before 1972 has to be paid for.  Wish I was making that one up.

The bill aims to streamline music copyright for the digital streaming era. But the trouble began when satellite radio giant SiriusXM raised objections to parts of the bill that would make it responsible for paying royalties on pre-1972 recordings the same way it does for recordings after that year. SiriusXM claims such a law is unfair, especially given that terrestrial radio stations (i.e. AM/FM channels), its main competitors, are exempt.

Kudos goes here to Bob Dylan’s camp.  They just released a treasure trove of live releases from the 60’s.  He doesn’t want them heard, or he would have released them by now.  More importantly, though… he doesn’t want them to fall into the public domain****.   His latest archive release is actually called ‘Bob Dylan, the copyright extension collection Vol 1’.

The 50th Anniversary Collection: The Copyright Extension Collection, Volume 1 is the first collection by Bob Dylan that Sony Music released to prevent the recordings from legally entering the public domain 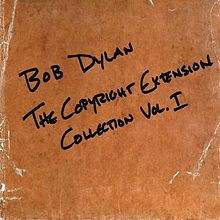 OK, now I MUST share this follow up.  the ultimate irony of Bob Dylan aggressively, but openly, protecting his songs from going into the public domain.  His first album was ENTIRELY songs stolen from public domain.  There is only one original song on that album, but its one of his finest in his whole canon.  Song to Woody.  Let's stop and just appreciate it.


And here is where Bob's savvy and thievery takes a right turn.  He changed the songs, just a tiny bit... maybe a single word or chord.  THEN... copyrights them under himself.  This whole thing is covered in the amazing Scorsese doc 'No Direction Home'.  When asked if those songs were his, he replied wryly "they are now".  Jesus, the balls on that guy.  Talk about fake it till you make it.   and I can talk all the shit I want about Bob, because I am his top fan.