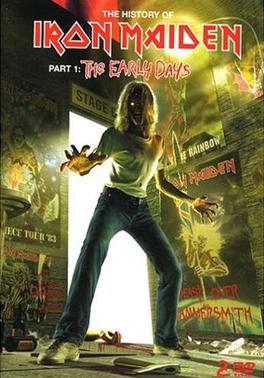 Iron Maiden will release on Tuesday 11/23/04 a 2 DVD volume called ‘The Early Days’ which chronicles the band all the way back to original singer Paul Di’Anno (a name probably only hardcore Maiden fans might recognize). It follows the band all the way through their world tour in 1983 supporting the epically influential metal record ‘Piece of Mind’. The first thing I can say about this collection is how massive and all encompassing it is. There is almost 6 hours of concert footage, exclusive documentaries, photos, discography, artwork etc. To me, this is the most complete and comprehensive multi-media offering of any band in rock and roll ever, and we are only half way through the band.

I regard the end period of this collection as the absolute great peak years of the band. I became a fan during the Powerslave years and regard 1982 to 1986 as the golden years. In fact, I first saw them when I was about 15 on the ‘Somewhere in Time’tour. It was amazing. I then saw the band a second time just last year, and they were even better then I remember as a teenager. I should qualify that statement and note I tore my ACL during that show and required $30,000 worth of surgery to fix it. Though my mind and heard were truly 16 again that night, my body remained an unfit 32! Regardless, the show was amazing and I have no regrets. I am looking forward to seeing them summer 2005.

One thing that struck me about the footage here is getting to watch the band evolve almost in real time. There is footage from Hammersmith Odeon in March of 1982 where Bruce Dickinson looks (and sounds) like a 19-year-old kid new to the metal bandwagon. However, just a year later in the Dortmund footage, you see the master of the genre. This footage shows Dickinson in top form. There is only one rocker who evokes more frontman-ness, that would be Robert Plant (or perhaps David Lee Roth in his heyday…eww).

To understand the history of Iron Maiden, you must respect bassist Steve Harris. Steve Harris is Iron Maiden. He is the chief songwriter and architect of the band and their sound. In fact, Harris is also the only original member. The 90 minute documentary is a fascinating roll call through the history of Maiden which features interviews with no less than 8 or 10 folks who have been in the band over the years, including some great interview with original singer Di’Anno.

Kabooke Quantum Fighter said…
dude you need to know whats what. find out how much i roole at infinitedensity.blogspot.com
1:45 AM

Lono of Denver said…
nope, sorry... you suck. This is all video game dork stuff. How did you get to my music page? Oh, and you said that your page is about how much you rule? Lemme show you a little trick about who rules and who is right, virgin boy.

the first site that pops up, that is my main site. The phantom blog is just my music offshoot. Bow before the master, even if I am not japanimated!

Clickbank Mall said…
I was searching for digital cameras and your blog was listed but I didn't finddigital cameras on your site, so I added my own link. Nice blog though.
7:05 AM